After almost five decades of an increasingly unfettered market economy, we look back on profound social upheavals: starting with the global economic crisis in the mid-1970s, the collapse of state socialism, the subsequent phase of globalization from the 1990s, the financial crisis in 2008/09 that endures until today. Since then, there have been repeated struggles for the reorganization of society between exclusionary politics and right-wing extremism on the one hand, and visions of a solidary, just and sustainable design of the community on the other.

At the beginning of the last century, the Hungarian-Austrian economist Karl Polanyi faced a situation that at first sight seemed to be very similar: the economic liberalization after the First World War, the stock market crash in 1929, the Great Depression, the socialist and fascist reorganization of society, the New Deal. However, History does not repeat itself – and so it is not possible to extrapolate from then to now. 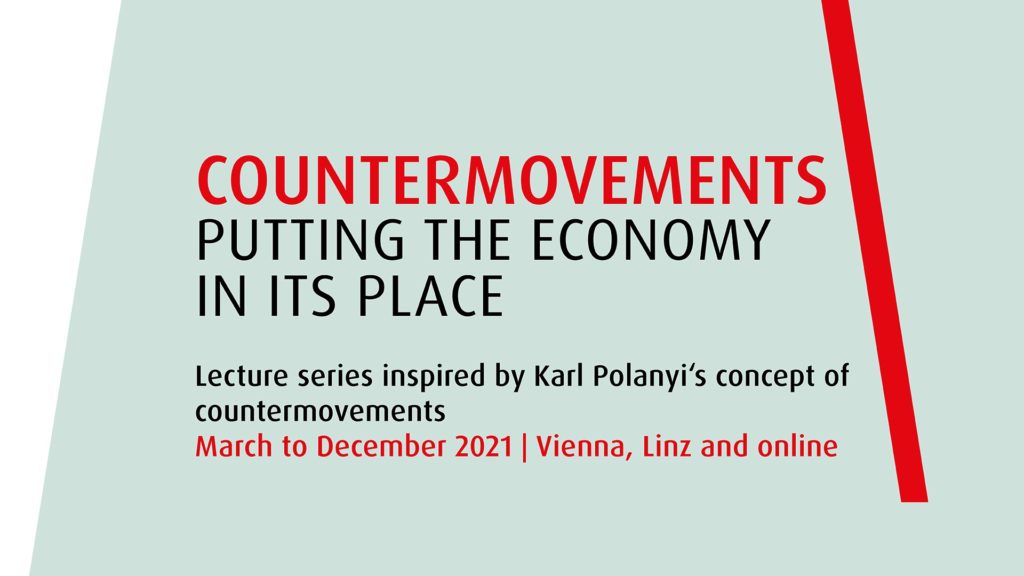 However, Karl Polanyi, left us a reflection in his internationally acclaimed magnum opus The Great Transformation, that inspired this series of events and to which it owes its title – GEGENBEWEGUNGEN. For Karl Polanyi, the history of capitalism is the result of a “double movement”: The “movement” with which society was historically subjected for the first time to the dynamics of the market economy and made into a “market society,” and the “counter-movements” with which it seeks to protect itself from the disastrous consequences for its natural and social foundations of life.

Not every countermovement that we can recognize today is directed against the financial capitalist development, but many things against which social struggles and protests are directed have been caused or advanced by it, such as the overexploitation of nature and climate change, global labor market competition and the precarization of employment relationships, the collapses in the social security system and the redistribution of wealth from the bottom to the top, the social divisions, and so on.

The series of events therefore takes up the motif of the countermovements in order to take a critical look at the social struggles of our time as answers to a market capitalism that has gotten out of control and to think about alternatives for social development. In this sense, the series of events not only wants to deal with the COUNTER-MOVEMENTS of our time, but also wants to be part of an intellectual movement that looks for solidary and sustainable alternatives.

The events are taking place online, hybride or on the spot. , but you have to sign up/register for them. Registration is required for each event separately and is possible via www.vhs.at/gegenbewegungen.

Whereas the welfare capitalism of the second half of the last century was accompanied by an expansion of democracy, the latter has recently been contested in new ways. The second part of the lecture series will discuss current developments and show, how democracy is endangered nowadays and how the democratisation of society has again become the object of social struggles.

“Putting the economy in its place “

Many societal problems are caused by misunderstanding the economy as a market economy and thus making ecological and social concerns secondary. Very often the particular structure of the economy proves to be destructive, which is why the first part of the series will take a closer look at alternatives.