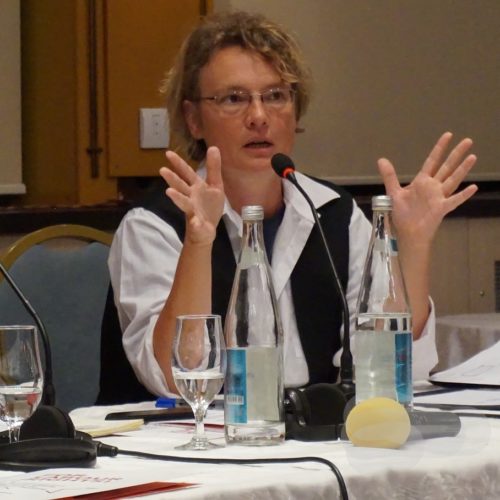 Mainstream discourses try to reduce Corona to “nature”, to a virus, an accidental outcome of some remote Chinese wet markets – or to an external shock that now troubles “our” economies. However, Corona is far from being external or “natural” – just as the climate crisis is not simply “weather” that descends on us. Corona is a social phenomenon, “collateral damage” from our neoliberal globalized capitalist economy. It is produced and reproduced by a mode of production, work and living that is organised around profit-orientation and capitalist competition. Its decisive source is the politically courted and economically powerful transnational agro-business. This industry clears forests on a large scale, destroys habitats, exterminates entire species and cages farm animals en masse, maltreating and weakening them. The accepted consequence is that microbes, viruses and bacteria can spread at great speed and mutate into dangerous pathogens in human bodies. It is the same industry that, in the midst of the pandemic and all over the Globe, is putting up with the fatal Covid-infection of thousands of typically migrant workers, forcing them to continue to work in the dangerous conditions of slaughterhouses and plantations while ignoring or supressing requests for protection and dignity at work and in their dormitories.

As Marx, Polanyi, and in particular the feminist care-debate, have shown, the rather peculiar parameter of profit, and the coercion to permanently enlarge it, systematically neglects our social interrelatedness among each other and as a part of nature. This is why Polanyi calls nature and labour fictitious commodities. Their treatment as objects and a source for maximizing profit destroys them both. This is exactly what happens. The commodification-fiction is no abstract idea but a daily nightmare-reality. The consequence is exhaustion. Total exhaustion is, actually, the widely used term by workers in the slaughterhouses to describe the effects of their working-conditions. We find it in many other workplaces, industries and services, not least in the health care system where economisation, commodification and privatisation deepen shortage of resources for the many and institutionalise two-tier medicine with high-class treatment for some. Total exhaustion, though, is also the status of nature where species, woods and lakes die while others become sick and continue to exist only in contaminated, objectified and privatised forms for the relaxation and distraction of those who can pay for it.

The antipode to total exhaustion, hence, is not individual leisure, the same as the antipode to Corona is not the strengthening of resilience and the formation of an authoritarian “new normality”. Both deny the socially and ecologically undermining character of the contemporary capitalist economy and project its bitter and destructive effects on a separated, dangerous “nature” with which we are at “war”, as for example French President Macron put it with remarkably bad taste.

The antipode to total exhaustion is to reintegrate nature and labour into society, or in Polanyi’s words, their decommodification. Decommodification is far more than the creation of some protective habitats and regulations for survival. It means the profound and democratic reorganisation of the economy and society on a world scale, in a way that recognises and institutionalizes nature and (man’s and woman’s) labour as the basic sources for social life. Following Polanyi, this project includes the question of power. Nice discourses about an ecological future and more global social responsibility are not only misleading, but, even more than that, they are dangerous, while they do not tackle destructive and reckless commodification and its agents, the transnational business-complexes and their shameless political protagonists.

is assistant professor at the University of Salzburg, Austria, and associated member of the Institute for Social Research (IfS) in Frankfurt, Germany. Her fields of research include global and European political economy, sociology of work and industry and economic and labour geography. Stefanie is member of the scientific board of Attac, the Rosa Luxemburg Foundation and the Mattersburg Circle for Development Policy at the Austrian Universities.